In principle, gas expansion is compression running in reverse. The positive-displacement RadMax gas expander is able to capture and convert both kinetic and pressure-volume energy in gas-expansion applications.

The RadMax positive-displacement gas expander is characterized by: 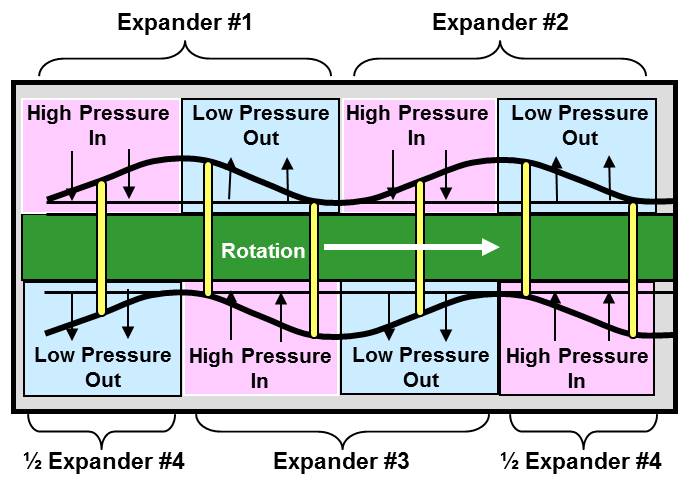 RadMax Gas Expander Cycle
The RadMax gas-expander design is a combination of four distinct sections:  two complete intake and discharge expansion cycles on each cam in the standard two cam configuration. This unique design allows for each of these sections to potentially be configured with different expansion ratios. Different porting options into and between the sections allow for stable expander speed control due to changing gas-flow conditions, or the capability for multi-stage expansion in one device. Additionally, the device has the potential to integrate an electric generator within the unit, creating a compact genset.

Gas Expansion and Work Potential Principle
The total amount of energy contained in a volume of gas is in two forms: pressure energy (useful work energy) and internal energy. During a free gas expansion process, like that found in a typical air-conditioning expansion valve or a mechanical gas-expanding throttling valve, pressure energy is not captured and is instead converted to internal energy with no actual work accomplished.

In contrast, the purpose of gas expansion through the use of rotary devices, such as the RadMax positive-displacement gas expander or a turbo-expander, is to convert as much of the available pressure energy as possible to output-shaft work instead of it being converted to internal energy. The benefit of using these types of gas-expansion devices over free gas-expansion devices is that the resulting shaft work can be used to generate other types of useful energy (i.e., gas compression or electricity generation) to help offset the cost of initially pressurizing the gas.

RadMax Gas Expander Operation
In the RadMax positive-displacement gas expander, the vanes move axially driven by the rotor face and the pressure in each chamber changes when the adjacent vanes extend or retract. During rotor revolution, the ends of the vanes follow a path that approximates a sinusoidal wave. This path is uniquely designed so that during each revolution of the rotor, the chambers’ volumes alternately expand and contract.

The process is repeated in each of the expander sections, in each chamber, and on each side of the rotor. The rotor spins continuously in one direction rather than violently changing directions as with pistons in a reciprocating device. Because the upper and lower faces of the rotor are 90-degrees out of phase, the RadMax gas expander is always balanced and exhibits minimal vibration.