Many industrial processes require fluid to flow from a region of higher pressure to one of lower pressure.  This is called a throttling process, and the physical devices employed are generally called throttling valves.  It is easy to suspect that such processes are wasteful.  After all, whatever energy was used to increase the fluid’s pressure is simply lost as the fluid expands into the lower pressure region.  That is, in fact, correct.  While their design is relatively simple, throttling valves have no mechanism to recover the energy used to compress the fluid.  Additionally, once the fluid is throttled to a lower pressure, that energy is no longer recoverable as it is converted to a different energy form.

Two thermodynamic principles are required to better understand these concepts:

During a typical throttling process, there are negligible changes in fluid velocity and height so that the kinetic and potential energies remain essentially unchanged. Thus, to comply with the First Law of Thermodynamics, changes in flow work, which are due to the reduction of both pressure and density, are accompanied by equal and opposite changes in internal energy; if one goes down, the other must go up by the same amount.  Therefore the “lost energy” is actually energy converted from flow work to internal energy. But when a fluid is throttled, what is lost is the ability to recover the energy that was available in the pressure.

The alternative to throttling is to use an altogether different process whereby the fluid is allowed to expand through a rotary device such as the RadMax gas expander.  The fluid flows through the expander driven by the pressure difference between the inlet and outlet pressures, and within it, the fluid expands as its pressure decreases.  But here, the design is such that the forces caused by the pressure differences and the expansion of the fluid rotate the expander’s shaft.  Therefore, rather than completely converting the flow work into internal energy as in a throttling valve, part of the flow work is converted to shaft work, and the balance to internal energy.  The shaft work can then be used to drive a compressor, generator or some other device.  Consequently, the RadMax expander allows the recovery of a portion of the energy used to compress the fluid that is unrecoverable with a throttling valve.  The actual amount that is convertible to shaft work is limited by the Laws of Thermodynamics and by the device’s efficiency.​ 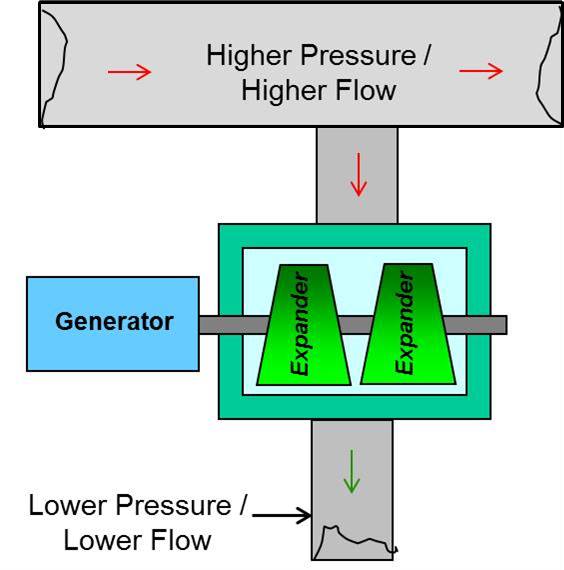